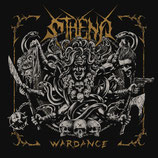 The album's 11 tracks blaze a trail of fury by way of blistering tremolo and battle-ready percussion. STHENO has blurred the boundaries between grindcore, black, death and other extreme strains of heavy metal since 2013. The band was founded by like-minded individuals among the Greek grind and crust scene with the intentions of creating harsh music while drawing inspiration from black and death metal without any regards, or limitations, to the structures surrounding each respective sub-genre.

After some line-up changes and several concerts in Greece, Germany, Switzerland and France, STHENO are ready to unleash their new album "Wardance", which features Christian Chaco, frontman of German death-grinders KEITZER, on vocals. Produced by Stelios "Stelth" Koslidis, the record is a war-themed concept album which is bound to catapult the band into the higher echelon of extreme underground metal.

To keep it extremely unrelenting without being stagnant and too monotonous is a difficult art form, but STHENO manages to stay away from all this and delivers an album full of metallic mayhem while keeping it fresh and dynamic at the same time. 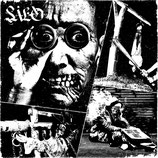 "Salò describe their style as “Indus Blackened Crust,” and after some musing on what this music may have to do with a river in the Indian subcontinent, I inferred that they’re probably refering to the French word indu, meaning something like unfit or inappropriate. The modifier seems, as it were, appropriate to signify their distinct take on the genre. While the instruments and vocals are mostly par for the course, you’ll notice right from the intro that these guys like to mess around with samples. These are used copiously and to great effect throughout the EP, creating a consistently unsettling atmosphere along with the synths. Everything being in French further adds to the unease and disorientation. The end result is weird and nasty and well worth your time." — Hans (toiletovhell.com) 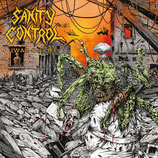 Warsaw crossover lunatics Sanity Control assault the state of this wretched world with their debut full length, War on Life! Loaded with eight rounds of hardcore infused thrash to decimate your senses, War on Life grooves with the right amount of hooks coupled with heaviness whilst also demonstrating a keen understanding of how to utilize the riff to pummel the listener. This album is an instrument of destruction and a screaming voice aimed at a broken system. Lyrically and conceptually focused on turning an eye onto the devastating state of the world today, Sanity Control encourage you to lose your mind willingly in the organized chaos of their combustible crossover universe. For those who worried Thrash was doomed to a future of retro cosplay, Sanity Control advise you to lay down your body and join the War on Life.

Sanity Control is a Crossover/ Thrash Metal band from Warsaw, Poland, who pay homage to the classic Thrash Metal bands while blending it with a distorted and aggressive hardcore punk attack not unlike the great Crossover bands before them - Broken Bones, MOD, and Crumbsuckers to name a few. Their lyrics cover various social issues and embody a geniune hardcore/punk attitude. Seeing Red Records are proud to team up with Selfmadegod Records to unleash Sanity Control's debut album, War on Life, to the world!

A must have for fans of BROKEN BONES, MOD, CRUMBSUCKERS, MUNICIPAL WASTE, CRYPTIC SLAUGHTER.

"Sanity Control are honest to goodness dirtballs who only care about playing fast and fun. Lets fucking do this." - Tape Wyrm on Sanity Control's debut Demo 2019

The imperial apocalypse has arrived here now with the official reissue of Sadotank’s 2nd full-length album! Originally released independently back in 2014 by this Frisian hellsquad themselves in a limited quantity of 300 copies, this reissue still presents the same 33 minute sadomaniacal skullthrashing inferno that was brought to a higher metallic level with the fine mixing and mastering efforts of Harris Johns (a well known name in the metal realm for his work with Sodom, Kreator, Tankard, Voivod and numerous others). 13 tracks of uncompromising boozedrenched black/thrash that will surely appeal to those into the sounds of bands such as Sodom, Destruction, Deströyer 666 and even Impaled Nazarene (to throw a few names out there), so you have an idea what to expect from this record. To complete the presentation, the cover was illustrated by renowned artist Joe Petagno (famous for his wide array of rock and metal album cover creations, especially those of Motörhead). Now just grab yourself a 6-pack and get this disc to raise hell! 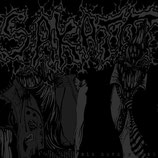 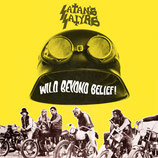 At war with false noise: Combining the super-fuzz garage sensibilities of Davie Allen And The Arrows and the catchy riffing and keen sense of songwriting of the "new" Electric Wizard, Satan's Satyrs have injected a youth breath of fresh air into the oft staid confines of the crypt of underground metal this past year or so through a series of ultra-limited singles and EPs. Wild Beyond Belief! is the first full-length and delivers on the promise of those early demos and then some.

I got chatting with Clay of SS a wee while back over a mutual love of late 60s biker movies, and they really form the basis of this record; from the artwork and the lyrics ("Ride Devils, ride, ride Sadist 69!") to the lo-fi recording sounding like it could've come straight from a greasy backstreet Grindhouse showing Hell's Angels On Wheels. There are no boring "drone" elements here, there's no chin-stroking/beards anywhere in sight, and the exploitation schlock element has a firm basis rather than some clown who watched Susperia cos Electric Wizard said they liked it and Googled "occult flares lol" in search of an album cover. It's just TUNES and ATTITUDE. Right on! 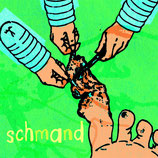 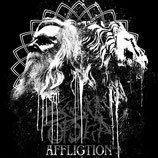 Are you sick of Deathcore? In a genre which is overwhelming with upcoming bands Science Of Sleep clearly break out of line. Science of Sleep are on their way to the top of the german deathcore-scene. Founded in 2010 in the city of Braunschweig (Lower Saxony), Science Of Sleep made it up to one of the hardest working german bands in this scene. Their debut EP "Affliction" delivers a new era of brutality, blastbeats and blood-freezing vocals. Within the length of seven songs the quintet shows the passion and love for what they are doing in every moment of their bandlife. "Affliction" has been recorded in the famous "Schwarzmusik Studio" (Heaven Shall Burn, Maroon) and will be released via Bastardized Recordings in summer 2012. Discover a new level of sickness and brutality! 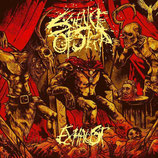 „EXHAUST“ is the first full length album of the German Deathcore band SCIENCE OF SLEEP: The band put endless hours of writing to create a 10 song masterpiece to unveil a new era of sickness for all fans of brutal death and mosh music. Brain killing blast beats, insane vocals and the heaviest guitars you could imagine formed this cd in the deepest circles of hell themselves. Fans of bands like Thy Art Is Murder, Molotov Solution and Carnifex will not be dissapointed. The album was recorded, mixed and mastered by Simon Hawemann of War From A Harlots Mouth at Moulder Studios. 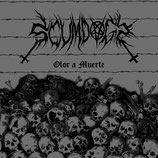 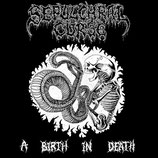 "A Birth In Death" is the debut recording from Sepulchral Curse 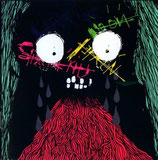 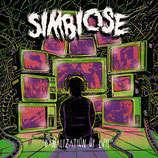 After four years a new album is coming, as always offers a good portion of crust punk with lots of well played and catchy melodis, dense guitars in slightly newer shape still in full strength complemented by Spanish singing guest singer, the sound will send you into the ground, it´s all packed with the lyrics about human causing destruction of the world.

Released in 500 pieces in a rigid, foil wrapper. 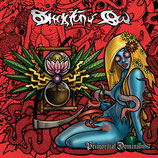 Originally released in 2008 by the band themselves, "Primordial Dominion" is a 40+ minute trip of madness that definitely deserved a wider and massive distribution. Everlasting Spew Records is revamping this psychedelic slab of death infused metal with a new Slipcase CD version and Vinyl and Digital versions for the first time ever.
Skeleton Of God, based in Denver, Colorado, took form from the ashes of Hideous Corpse and helped forging Death Metal and Brutal Death Metal back in the 90s with their debut EP "Urine Garden" showing everybody that there were no boundaries in the genre. "Primordial Dominion" continues this way, a trip definitely without any kind of limitation, incorporating huge doses of psychedelia, mind bending doomish passages and severe attacks of grinding death metal.
The line-up saw the presence of Joel DiPietro (also in Exit-13, Satan's Bake Sale) who recently passed away at the age of 44. 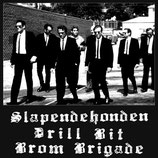 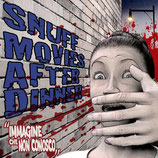 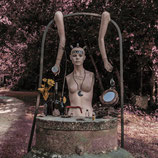 Noise Rock and bitterness from Italy. 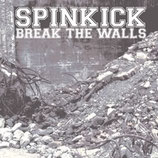 Heavy Hardcore, strong riffs, solid songs, mad singalongs and gang vocals combining the best of NYHC like Death Threat with beatdown elements. This is the full length that followed up their acclaimed debut cd 'Giving it Back'.

Spinkick: “Count on nothing” CD 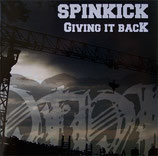 Spinkick: ”Giving it back” CD 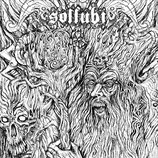 SOLLUBI - At war with decency CD

SOLLUBI are a side project from the guys of FISTULA and RAPE X. They play a very original kind of psychadelic / sludge. You can find the down tempo and the heavy sound of FISTULA with a psychadelic and noisy vibe made by RAPE X. They sounds like a tribute band of HAWKWIND made by -(16)-. 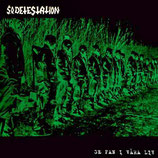 After spending the last few years writing touring, Sound of Detestation have worked brilliantly to expand their sound. Almost overnight it seems they have mutated into a multi-dimensional grindcore monster that is set to expand the horizons of modern grindcore.

While many modern grind acts have looked to other genres for influence - Nasum of course took a strong hardcore and crust influence and infused their grindcore with patches of melody and (perhaps most importantly) groove - Sound of Detestation have taken their progressive grind even further, expanding on Nasum's more melodic and groove-driven moments to push further through passages of epic post-hardcore from later-era Breach and Cult of Luna, the modern death metal influence of Coldworker and the crust/hardcore of Skitsystem.

And all of these fantastic elements are only enhanced by the beautifully thick and warm production of William Blackmon (Gadget) at his studio The Overlook in Gävle, Sweden .

This is clearly the work of a band who refuse to stay stagnant. This is epic European modern grinding hardcore and metal at it's finest. Fans of Nasum, Rotten Sound, Afgrund, Skitsystem - and even Breach, Cult of Luna, Coldworker - would do well to look this one up. 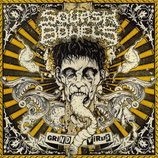 Squash Bowels are back again with another album of guttural grindcore! Brutal beyond belief, but sprinkled with groove and memorability, Grindvirus is one tasty grind treat with plenty of gory panache. European release on Selfmadegod Records. 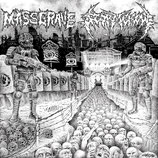 CD version of this great piece of crust.

Bay Area Stormcrow are one of the best stench-core (that's the way it's called nowadays) bands in the world, along with bands like Sanctum, Hellshock or Limb from Limb they have taken Axegrinder, Hellbastard, Prophecy of Doom, Amebix, Bolt Thrower, Deviated Instinct and more, swallowed them and then given birth to an even more brutal heavy sounding hellspawn!

Mass Grave hail from Vancouver, Canada, and have beein infesting the scene since 2004 with several records, and each one is always more brutal than the previous one. This is grind and even death metal fueled crust, think of Disrupt crossed with a pneumatic hammer: fast, violent, heavy!Includes 5 bonus songs from Mass Grave! 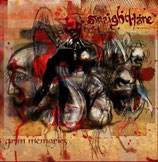 SInger and Guitarplayer later moved on to DEPHOSPHORUS!

SInger and Guitarplayer later moved on to DEPHOSPHORUS! 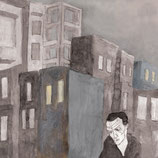 SUN OF NOTHING "The Guilt Of Feeling Alive CD

SUN OF NOTHING (GR) “..And voices, words, faces complete the dream” digipack CD