UP FOR PRE-ORDER NOW!

7DegreesRecords and Merciless Records are proud to present a special split release between Germany's Cancer Clan and DESTEUFELS on vinyl LP format.

As a special offer, there will be a bundle of the LP + the CANCDER CLAN / GOD'S AMERICA 7"

During springtime 2019 these two german bands toured together and so it was just a small step further that they were willing to share this one piece of vinyl due out on 13th of December 2019.

CANCER CLAN was formed in 2005 out of the ashes of CRUDE BE.

They describe their music simply as Blastpunk, but it’s so much more. On a skeleton of grindcore they add crust, punk, hardcore and even have a weakness for thrashy riffs. In total this becomes a highly energetic, fast as fuck, at times heavy as lead entity of skull-splitting musick!

After releasing a couple of demo CDs and 7"s and touring Europe with the likes of Weekend Nachos and BLOCKHEADS they released their first full length in 2015. In 2017 a split 7“ with GOD’S AMERICA followed.

Three new songs and a Deutsch-Punk classic cover will blast your speakers!

Recorded and mixed by Sebi during summer and fall 2018.

DESTEUFELS – humanoid but bigger… evil, ugly – bowlegged and tremendous… deeply beneath, a greyish black color… coarse, dissonant, loud and fast… the three, praising decay and lunacy as a triumvirate…

DESTEUFELS are a metalpunk band that started years ago. What you get is d-beat-driven classical and classy stenchcore. At times they rock really hard, on other occasions the thunderous double kickdrum provides the heaviness and the thrown in blastbeats do the rest to make you feel at times like you’re in the UK during the eighties. Following on several demos, 5 new songs are pressed on a vinyl record.

Recorded, mixed and mastered in Ali’s studio during May/June 2018 in Jena, Germany.

UP FOR PRE-ORDER NOW!

SERPENT EATER know exactly who they are and what they are doing on 'Vanitas'. Opening with a stomping black metal crusher of a riff overlaid with cackling screams and ripping double kicks, this is blackened crust at it's most operatic and metallic.

The production and performances here are supremely polished and well rehearsed, there isn't so much as a squeak of feedback that feels out of place.

Their riffs are certainly serpentine as well, meandering around and over the drums like the coils of a resting python, springing to life for moments of attack before coiling back in on themselves.

Vocally they range from the head tilted back howling screams of black metal to almost guttural death growls, this is used almost instrumentally to add dynamics to their compositions.

This is a professional and expertly performed and produced release that sees SERPENT EATER sounding like a true venue destroyer, certainly a band at the very top of their game and worth catching!

We just received a huge package of the great Corpse Flower Records!

And we are happy to distribute the awesome new album by THEORIES, Vessel, for whom we were able to work with in the past...

We finally have in stock - most of them in different versions:

Playing Enemy - I Was Your City LP - WHITE VINYL

WOUNDVAC - The Road Ahead CD

Amplified Anger Recs (RIP) found some last copies of this rager by Zodiac in their basement recently!

5 Tracks of intense raging Hardcore from Bremen/ Germoney! A furious bastard of 90’s Bremen HC and early 90’s US-HC ala Rorschach, Uranus etc. and a healthy dose of Metal in a timeless modern outfit. Dark and heavy!

Great German lyrics about us - the shaved ape!

Comes with a 12-pages booklet!

Read a nice behind-the-scenes article on their website and then buy this masterpiece!

The release contains an expansion on their blistering grindcore sound, seeking influences beyond and creating a rattling, crushing force that will not only go beyond the beaten path, but deconstruct it all the way through.

SUFFERING QUOTA is a grindcore band from Groningen, The Netherlands, mixing elements of crust and death metal into their sound. Through a few line-up changes on bass and vocals the band is back with a more eclectic sound, yet they managed to remain a solid live act through the years.

With this new lineup they released a split with My Minds Mine in 2017 and are ready to drop their next effort, the sophomore album "Life in Disgust" and crush stages everywhere.

There will be no warning, there will only be damage.

"Behold the utter bedlam ... and make sure you hit up the pre-orders from the labels above. Grind your mind to pieces!" -  CVLT Nation

"As tends to happen with grind bands from one release to the next, there’s been some definite growth in Suffering Quota’s sound since last year’s split, though I wouldn’t necessarily hit them with the dreaded ‘mature’ tag. Their brand of crust-infused grind is as nasty as ever..." -  Indy Metal Vault

"Dutch grind unit Suffering Quota are a force to be reckoned with on Life in Disgust, their new album. A furious romp through twelve brief songs..." -  Decibel Magazine

LP is pressed on 180g black heavy weight vinyl, 300g Sleeve with black print inside, plack innersleeves and includes a Poster and Sticker!

LP is pressed on 180g black heavy weight vinyl, 300g Sleeve with black print inside, plack innersleeves and includes a Poster and Sticker!

One year after the CD/ Tape release, the vinyl version of this masterpiece finally will see the light of day!!

CALVIN: If people sat outside and looked at the stars each night, I’ll bet they’d live a lot differently.

CALVIN: Well, when you look into infinity, you realize that there are more important things than what people do all day.”

With 6 vinyl releases spanning from 2011 to 2015, the Athenians are embarked on a cosmic quest. Their concept and aesthetics draw influences from cosmology, astronomy and science fiction literature, as well as the associated sociopolitical and existential repercussions.

Being impossible to describe their music style by using one or two genre references, they have chosen to call it “astrogrind”.

“Impossible Orbits” is Dephosphorus’ 3rd album and their darker and more violent effort to date – both musically and lyrically. Its 9 tracks clocking at under 30’, see them return to a more condensed form of expression, not unlike their critically acclaimed “Axiom” debut mini-LP.

The similarities with the latter do not stop there, as Panos Alexiadis is again on board handling the live electronics and putting an extra eerie touch to the record’s atmosphere.

“Impossible Orbits” has been recorded and mixed analogically at Unreal Studios. The artwork has been hand drawn by Viral Graphics.

"The band exists between dimensions; thematically with their sci-fi influences, but also sonically. It is a balancing act between different worlds of extreme metal. From the brutality of death metal and the volatility of grindcore, to the venomous touch of blackened influences and the attitude of hardcore, Dephosphorus mould these diverse worlds into a fiery result." - CVLT Nation

"Impossible Orbits is largely an enjoyable experience, and probably the best grind album so far this year." - Yourlastrites

"So what does this all sound like? Well, if you sent anarchists out into the farthest reaches of the galaxy to form space-squats, they would play some sort of cosmic crust-grind, altered by the journey: the genre’s dystopian anger transmuted into fervent hunger for a real future, and wide-eyed reverence for the approaching stars." - The Quietus

UK's Grind Bastards of KRUPSKAYA are already packing their van to shatter the European Mainland. 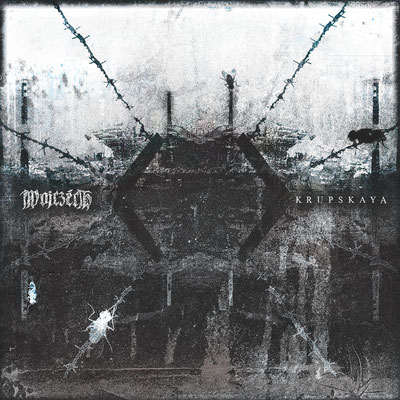 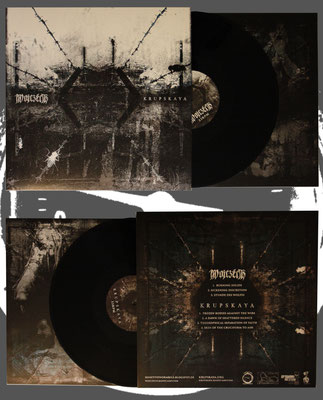 German grind unit Wojczech release three pulverizing and varied tracks for this ambitious split with UK band Krupskaya. They add more flavour to the proceedings and remain unpredictable for the most part without compromising on the sonic impact. Sounding like a contemporary blend of early Brutal Truth, Nasum, Dephosphorus and even Pig Destroyer, they've covering many sub-styles and it all falls in place beautifully. Here's grindcore that's not monotonous but just as exciting.

Krupskaya from UK tear the place down after a pensive build-up, and they're astonishingly fast. Reminiscent of Agoraphobic Nosebleed, Exit-13 and Yacopsae, their music will give you a head rush. Interspersed by atmospheric passages, their wild blasting feels even more intense and is bound to leave you scampering for cover. Crazed-up, hyperspeed grindcore is the order of the day and Krupskaya are one of the finest bands at present at that.

We'll be at the awesome , almost sold out Bloodshedfest this weekend, bringing our distro stand!

Due to higher prices of the  German Post/ Parcel Service, we unfortunately had to increase the international shipping costs...

spring is here, time to clean out the storage. The old shit’s gotta leave to create space for the new one.

Simply apply the code FRUEHLING17 during the checkout process.

Order Vinyl in our Store or Digital on BC.

We're stoked to bring our distro stand to Bloodshed Fest the whole weekend.

If anyone wants to have an order taken there to save some shipping, get in touch!! (make sure the item is not sold out)

We'll have the new Krupskaya/ Foible Instinct 12" on board!

See you there , fellow grinders!

I WANT THAT 12" NOW
I WANT BITS AND BYTES

WAKE's "Sowing the seeds of a worthless tomorrow" OUT NOW!

Available as LP w/ Download code and Digital through us in Europe  and NERVE ALTAR in the States, CD via EverydayHate and Tape through Sentient Ruin Laboratories!

8/ 10  "The multifaceted wealth put in these only 20 minutes inferno is really remarkable. Intense Record!"

"Wake is pissed. Granted, most grindcore bands are angry, but Wake’s music spits, stomps, and bucks with an unbridled, animalistic ferocity."

"It’s a shame this band isn’t being talked about in the same breath as modern grind bands such as Torch Runner and Rotten Sound, because with Sowing The Seeds of A Worthless Tomorrow, WAKE have dispelled any notion that they’re unfit to be modern grind royalty."

"Sowing the Seeds of a Worthless Tomorrow is eight tracks of the quintet showing off, well, everything I mentioned up above but with harsher production, tighter execution and somehow a few extra doses of absolute carnage."

"The infamous and terrifying avant-grind horde from Calgary, Alberta has prepared the battlefiled for what is destined to be one the most humiliatingly devastating and bone-shattering extreme metal releases of the year. "

A whole new level of violence and aggression from Canada's most infamous grindcore killing machine. WAKE's third full length album is a war zone of ferocious and swarming aggression that elevates the bar of grindcore to an entire new level, opening massive wounds in the listener's perceptions with a vicious and unrelenting onslaught of grindcore, sludge, black metal, crust and crippling post-hardcore.

Engineered, Recorded and Mixed by Joel Grind at Falcon Studios

Mastered by Brad Boatright at Audiosiege

Art and Layout by Hal Rotting

Teaser video for the upcoming WAKE LP through us - 7DegreesRecords, Nerve Altar in US, EveryDayHate on CD, Sentient Ruin Laboratories on TAPE

more to be announced soon