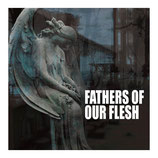 V.A. – FATHERS OF OUR FLESH – Tribute to GODFLESH CD

FATHERS OF OUR FLESH | An uncompromising tribute to the heroes of industrial metal GODFLESH --- 13 Bands / 80 minutes of harsh sounds and devastating perdition. 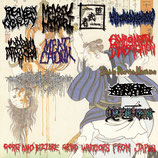 In 2021, Some bloodthirsty samurais still alive in Japan. They killing evil sprits and people with a sword, while also playing Goregrind, Cybergrind, Gorenoise, Noisegrind and Pornogrind. Happy Despatch Productions get them together and release the sickest compilation CD. This is the first release of HDP, and it has fully energy and activity and power of Grind. And everyone hopes revival of Goregrind and Grindcore in Japan. 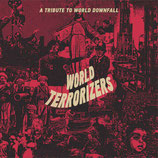 Epic tribute to one of the most important pillars of extreme music. Featuring bands from Philippines, Colombia, USA, Greece, Germany, Italy and Canada. CD format, limited edition to 500 copies.

NOTE. This is an unofficial and DIY release. It was made from fans for fans to salute the legacy of this legendary album

This is an underground tribute to the most iconic gem of extreme music. For more than 30 years, the album World Downfall continues to inspire thousands of bands around the globe, and its legacy is considered as one of the best albums in history of metal music.