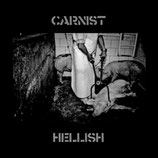 CARNIST hail from London and Austria and featured ex and current members of a ton of bands (Light bearer, Plague Mass, Shels, Anopheli) CARNIST began their tirade against the meat and dairy industry with 2012's "Unlearn." HELLISH feels like a very different, more concise release, a much heavier D beat crust punk has replaced the more melodic hardcore of their previous effort, yet still retains moments of melancholy melody reminiscent of HIS HERO IS GONE. HELLISH features spoken word specifically recorded for this EP by Social Psychologist Melanie Joy, who coined the concept of Carnism, from which the band takes its name. 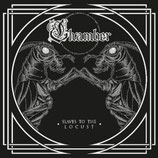 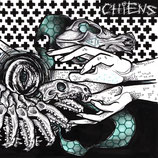 CHIENS - Vultures are our future Gatefold 10"

French Old-School Grindcore / Fastcore / Power Violence release with “Vultures Are Our Future” a merciless onslaught of canine rage. A storming 10″ EP for fans of INSECT WARFARE, WORMROT and THE AFTERNOON GENTLEMEN. 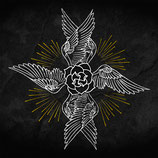 CHILDREN OF GOD the sun gives way to false truths 10"

"The Sun Gives Way To False Truths" starts out somewhat different to what you'd expect from this band. Instead of jumping straight into blasting beats and screaming vocals full of despair, the track begins very quietly and slowly. I've only experienced this side of the band once before on the awesome split with Seven Sisters of Sleep (Bled Dry). For the first minute or so you are only greeted by an ominous tone that slowly works its way into the higher decibel range, which eventually is replaced by a painfully slow down-tuned riff. All the while you can just feel the tension rising, rising towards something outstanding. There is a slight pause and then it hits you; a heavy drumbeat that seems to rip the very fabric holding the song together wide open. From here on in it's all go, or so it would seem...

Much to my surprise, things are slowed down once more. This time bringing the sound to resemble an eerie dark noise track not unlike rVeVV. I assumed this would continue to the end and eventually fade away, but I was again taken by surprise. It does fade away, but only to bring the crushing drums back again one more time...

Although this is still very much a COG track something seems different. It sounds more refined and mature. Instead of focusing on the blistering speed seen in their previous work, the band has taken the time to develop a really solid heavy atmosphere, and it's just great. At just under 10 minutes, "The Sun Gives Way to False Truths" is the longest track by COG, one that takes you on a trip showing the true musical skills of this band." 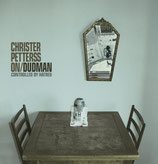 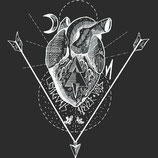 Coilguns The first band hails from La Chaux-de-Fonds, Switzerland: Louis Jucker – Vocals, Jona Nido – Simultaneously both guitars and bass, Luc Hess – THE fucken drummer. It´s some “-core” in any case - rather Hard-/Grind- than Metal- I´d say, with some hints of Prog. And they seem to be a pretty angry bunch, as they hardly ever cease to smack us around with their music. Only song 3, featuring a Punk guitar, gives you some air to breathe, and track 4 has a sort-of relaxed Motörhead-ish groove (well, on Speed). By the way, they recorded those tracks during their Austrialian tour at YOYO Studio in Perth, Australia, with Adam Round. According to the band´s definition it´s “D-Beat/Grind/Black-Metal Tech´n´roll without double foot machine”, by the way.

Never Void from Minden, Germany, who hosted this project, have a similar idea about sound (“Post-Hardcore”). I have to admit that the first of their 4 songs didn´t trigger me to realize that now it´s a different band playing – although the shouter sounded a bit different and the sound quality changed a bit (because those tracks were recorded live, once you even can hear cheers of the audience). Yet here the focus goes to Prog Metal a la Voivod & co: aggression plus sophisticated drumming and riffing, their second song even adds Doom and the final track turns out some jazzy semi-acoustic impro session. 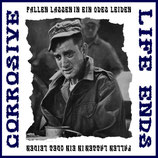 6 new tracks from germanys thrashcore nerds CORROSIVE. mostly fucking fast hardcore mixed with some slower, crawling heavy stuff. unbelievable that they already existed back in the 90ies and were on hiatus for some years… these old man sound so angry, so fresh – a lot of new bands with young people did not manage to sound as intense as they do! i always have to think of “traditional” SLAP-A-HAM records bands like CROSSED OUT, INFEST or MITB while listening to CORROSIVE but there could be recognized a massive DEUTSCHPUNK and also a slighty CELTIC FROST influences…

LIFE ENDS is power-violence styled grindcore with nihilistic lyrics !!! germanys answer to INFEST. loud and aggressive. if you dig the power-violence parts of IRON LUNG and like german stop-and-go grindcore you can’t be wrong here. LIFE ENDS deliever 9 songs that made me hungry for more – so i will contribute my help for the up coming 7″ that should be released later this year… in the meantime – try to get their demotape that is also rereleased now.