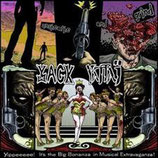 Powerful Crust Grind from Hungary versus Hard-Boiled Grindcore from France. 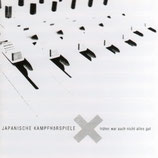 Now Bastardized Recordings rereleases the best of the sold-out classics written between 1998 and 2002, not remixed, not remastered!!!

This is the early JAPANISCHE KAMPFHÖRSPIELE – finally available again on CD.

Four bonus tracks include demo versions or early recordings of their later Hits, together more than 30 songs on one CD including all the lyrics and sidenotes within the booklet.

Witness why bands name JaKa being their musical influence now! 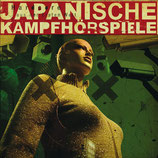 Beware, degenerated Generation XP! Cleanse your pallet with a potent jackhammer while the German ambassadors of Grindpunk incite you with more short prose of visionism about us and society, molest you with more vocal-battles between deep-grunted growls and high-pitched screamings, penetrate you with more devastating grind, and annoy you with more ultra-fast HC, mind-blowing blast beats plus a fair amount of good old death metal. Don’t expect less, stand back and let JaKa in!

"I won't lie, news about the new album of Italian Grinders Jesus Ain't In Poland has surprised me a lot. Because I was sure that they were in deep and cold hiatus. But our friends were silently preparing a huge portion of noisey material. This hammering album contains 12 songs and more than 1 hour of noise! On this album, the guys tried something new, this massive album is not just pure Grindcore… No Man's Land consists of Grindcore, some Black metal tinges and an atmosphere of doom metal. Maybe some nerdy Grindheads will say “this sucks because it's not Grindcore, there a lot of metal stuff in here too”, but fuck them. Because this album definitely works and it's huge in many ways.

The first time I heard No Man's Land I was pinned down to the wall. By the time it was over my mind had melted. This work surprised me with its technical side and its powerful sound. Jesus Aint In Poland managed to embed small ambient moments throughout their Grind mess which melds perfectly. They pieced together fast crushing Grind segments with Doom/Black Metal elements so precisely. Every song has a beautiful, yet suffocating dark atmosphere especially in the end of album.

This beautiful specimen is wrapped in a neat little digipack. It has magical artwork with a very emotionally moving art piece. Plus it has the lovely, bitter smell of fresh paint. 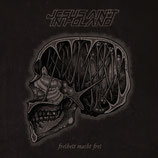 Jesus Ain’t In Poland formed in 2004 in Modena, Italy.

Shortly afterwards the project would be dropped because of its members various engagements, but it took form again one year later, with Ricky “Rigetto” filling in to handle bass duties. This is the current line-up so far.

Since then JAIP started playing live, walking stages for the most across north and centre of Italy.

As of 2008, first 10 tracks self-produced EP “Holobscene” was released. It was live recorded, mixed and mastered at Studio 73, Ravenna, by Riccardo Pasini, in November 2007.

One year later the first european tour just succeeded, together with 2 Minuta Dreka from Bologna, they shared the stage throughout Germany, Poland, Slovakia and Hungary.

Afterwards the four gave themselves up writing new material for a forthcoming full-lenght release, it was live recorded, mixed and mastered once again at Studio 73 under supervision of Riccardo Pasini, during 4 days in July 2011; the long awaited follow-up “Freiheit Macht Frei” will be released on February 10-2012, as well as promoted and distributed by Grindpromotion.

Since the very beginning, Jesus Ain't In Poland within their sound incorporate multiple extreme music influences: death metal, grindcore, hardcore punk, sludge and thrash metal fuse all together, defining a diversified and compact style which constantly evolves throughout the years.

It's up to you now. Whether it's true or not such blade actually cuts. 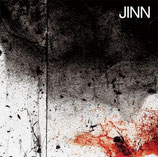 The one and only album from Newcastle's brilliant burly hardcore thrash mob.

Ex-members of Grace, Ebola, Thirty Seconds Until Armageddon, Generic and One By One. 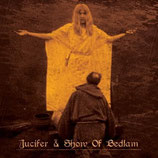 The JUCIFER's songs on this split are probably the heaviest stuff from this amazing duo. The 4 songs are really different but very heavy, forget the nice voice of the cute girl on the other albums, you'll only find a demented and crazy girl who scream all the way!! This D.I.Y. recording sound will remind you JUCIFER live. SHOW OF BEDLAM from Montréal are also a band led by a demented girl. Can you imagine SAINT-VITUS with JARBOE on vocals? S.O.B. are a heavier version of this crazy proposition. That's the new band from the guys of SEIZED and TOWARD DARKNESS. For fans of MADE OUT OF BABIES and BATTLE OF MICE.