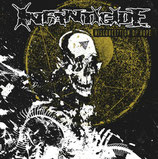 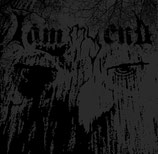 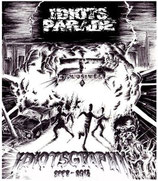 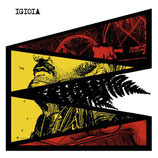 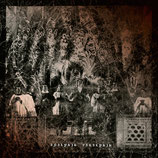 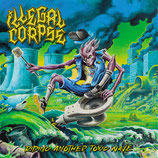 Kick in your ass Trash/Hardcore/Crossover/Punk from Nancy France!!!

Comes with printed innersleeve and A2 poster

Pink text color on the cover

“Riding another toxic wave”. The second one for our favorite Vosgian trasheurs ! Big surprise with these 13 breathaking tracks, massively energetic with fast rhythm driven. We think directy about Municipal Waste, Insanity Alert or Suicidal Tendencies etc… Lots of improvement from the band with these 13 furious tracks 3 furax tracks with hyper-worked compositions, and with a singer who detaches itself from his hardcore style to perfectly stick to the trash/crossover style of the band. Here, we get hurt ! A big slap in your face ! LP with really nice colored artwork from “Bungle Ced Artwork”, delivered with A2 poster ! 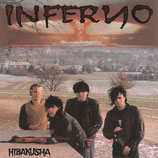 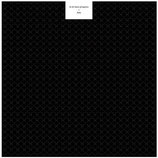 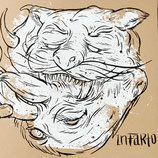 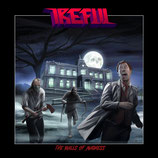 Music, vocals, Coverart and bandfotos shout out the tribute to the hero of (US-) 1980's THRASH.

Really a fun record and highly recommended if you like f.e.  VIO-LENCE, DARK ANGEL, BULLDOZER etc. 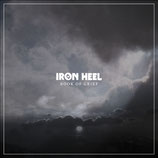 "Like it or not, the east coast of the US (specifically PA/MD/VA/DC) is home to some of the best and most interesting/creative bands in contemporary grindcore. With bands like DOC, TRIAC, CHEPANG, and FULL OF HELL, it’s hard for anywhere else to keep up. Well, there’s another name that should be added to that list, and that’s IXIAS.

Originally a trio based between Baltimore and DC, IXIAS has gone through a few lineup changes — one of which had them performing as a two-piece for a bit — and is now a four-piece based entirely out of Baltimore. Their initial sound sat somewhere between DISCORDANCE AXIS and early PIG DESTROYER (Explosions In Ward 6 era), but as they’ve grown, more influence from bands such as ASSÜCK and GASP has shown up, pushing them from the status of being a memorable band to being an unforgettable one. During their existence, they’ve released a tape on ESTRANGED COMMUNICATIONS, along with splits with NECK BREATHER and DETERIORATION, and now have recorded an LP due out in December on GCBT and To Live A Lie (more on the joint release in a bit).

...The release of the LP is another boundary-pushing endeavor. There will of course be the music (vinyl release by GCBT & Holy Goat), but there will also be a film that accompanies it (released by TLAL). This sort of thing is incredibly rare, and the closest thing I can think of is PIG DESTROYER’s Prowler In The Yard and the PITY short film, or maybe something done by BRANDON WALD on his BLACK RING RITUALS and INVOCATION FILMS labels, however, that isn’t really the same thing. This almost feels like something the BUTTHOLE SURFERS would’ve done in the early 80s, or maybe even one of the artists associated with the New York No Wave movement of the mid-late 70s. The video being premiered in this feature is an excerpt of that film, which should give you a taste of what to expect. " - Cvltnation 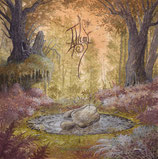 IZTHMI - The Arrows Of Our Ways LP

"One of the hallmarks of the metal landscape across the 2010s was the regular and surprising combining of old forms into, if not entirely new, somewhat new ways. Behind all the genre revivals was the regular spark of creativity – old and old infused to make new – or something like it. Here at the outset of the 2020s that spirit remains alive in the work of Pacific Northwest outfit Izthmi and their debut The Arrows of Our Ways.

As with most bands of a black metal disposition hailing from their geographic area, there are elements to this album that won’t be surprising – lengthy, atmosphere-laden tracks that mold and shift gradually. What might be surprising to the unsuspecting listener (myself included) are the band’s forays into progressive territory, post-intro track “To Traipse Alone” echoing with the hallmarks of classic era Opeth – acoustics included. Similar progressively-minded guitar work anchors “Useless Is The Song of Man, From Throats Calloused by Name” (a mouthful, yes), a gradually shifting, weighty piece of work.

In considering the other songs or the album as a listening experience more broadly, it fits largely outside the usual context for the PNW. There’s very much a black metal skeleton and spirit here, every element of the album is coloured in that spirit. But as a listening experience, it is more dense not at all meditative. “This Listless World” is almost an exercise in panic. Three of the eight tracks function as reprieves – synth-driven affairs that link the longer tracks. Perhaps most surprisingly, there are no real instances of ‘post-‘ here and the sequencing is fantastic: closer “The Arrows of Our Ways” is the most involved and wrenching work here.

It may be that Eigenlicht was a torchbearer. Repurposing the old is nothing new, either within black metal or the PNW. The Arrows of Our Ways leans into it solidly."
-Dead Rhetoric .com