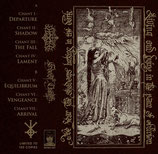 Ghost Chants is a twisted beast of an album.
The first full-length from Poland’s Outre, its thirty-five-minute duration is a mind-trip of the highest order and a surefire highlight in Poland’s black metal of this decade so far.
- Metal Rules

Ghost Chants is black metal on acid. It has Mysticum’s ‘Black magic mushrooms’ feel, a deep rooted viciousness that will stand out amongst today’s mainstream black metal packaged prospects. It is an impressive offering, a mature debut effort and a record that should turn some heads in black metal circles. Check out this impressive release!
- MetalRecusants

Leave it to a polish band to release a deeply intriguing, modern and yet distinctly old-school feeling black metal album. This is aural discord in a pure, distilled form. Unlike other modern black metal, which can often sound like its traying to go in too many different directions at once for the sake of shallow extravagance, Outre have crafted an album which is refreshingly linear in its concept and in its composition. Seamless isnt even the word to describe this records progression, and the sound quality here is top notch. This is sophisticated and all-consuming. A fantastically realised, thought-provoking debut that is nothing short of a real pleasure to listen to.
- Powerplay Rock and Metal Magazine

Production during the entire album is exemplary, giving the vocals and each instrument room to breathe and make its presence felt yet contributing to an overall extremely accomplished sound – the result of four very talented individuals working as a solid unit. Their music is technically very precise and impresses at every twist and turn as they flit from tempo to tempo and style to style with no problem whatsoever. It’s sterling from start to finish and admittedly I was pleasantly surprised at just how good it is.
I suggest you get your act together and give this a listen, there’s no way on this earth you’ll be disappointed. A stunning and majestic debut album.
- The Lair of Filth 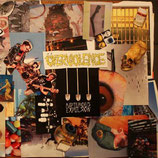