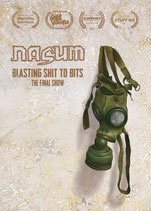 Please note that even though this DVD is region free, it is in PAL format. Some DVD players in the US and other countries are not compatible with PAL DVDs and as such. Once you have purchased the DVD and cannot play it properly let us know.

Swedish grindcore band NASUM quickly rose to become one of the most influential acts of the extreme metal underground. But when lead singer Mieszko Talarczyk died in the tragic tsunami of 2004, NASUM instantly ceased to exist. Eight years later the band's surviving members embarked on a world tour with the intent of ending NASUM "the way it was supposed to - exploding in a ferocious, blasting frenzy, not wither away at the mercy of tragedy."

BLASTING SHIT TO BITS – THE FINAL SHOW is a documentation of the band's final, emotionally and sonically pulverizing show in front of a thousand fans in Stockholm. The film applies a raw DIY aesthetic to show the band's final performance as it was, while incorporating new interviews where the band tell their story.

8-page booklet including photos and a text by Nasum drummer and founder Anders Jakobson.

INCLUDES OVER 40 MINUTS OF BONUS MATERIAL:

Before The Show (9min)

After The Show (5min)

The hours after the final show, behind the stage.

Proof of concept footage from the appearence at Roskilde Festival, Denmark.

From the show at Pumpehuset, Copenhagen, Denmark, September 22, 2012

Doom& Distortion is a Kick Off Double DVD of Punk/ Hardcore/ Grindcore& Extreme Metal Performances captured at Motorship Stubnitz from 1998- 2007. MS Stubnitz is a 1968 built heavy Tank & Fishtrawler emerged to an Epicentre for Experimental Arts since 1992 run collectively. 33 Bands such as Atrocious Madness, Melt Banana, Unholy Grave, Catheter, La Fraction, Church of Misery, Sayyadina or Sourvein. Each track comes with a mix of 3 cams, added with an enhanced Mixboard Sound done with a Special Biophonic Head Audio Recording System. All Shows recorded by the Stubnitz Media Crew and edited at the Boats internal Media Lab. All Sounds were mastered very carefully, keeping the maximum of original Tone and Range in contrast to all Loudness War Compression Habits. DVDs are crap and worthless today. We cant get away with all that plastic trash but this one true Stubnitz DIY Hardcore Memorabilia proves the result of 5 years heavy work, selection, post production, heart & chaos. And for all you Quitters we love both Worlds: Punk and Metal. Compiled and released by Sensitive Wormrile, Wifagena and Plattenfroster. 1000 made. Hurry up!