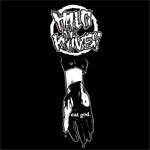 Tearing out of Western Australia in a hailstorm of blood and splintered bone comes the crushing debut MCD from Halo of Knives. Featuring members of Hailstones Kill 200, this battering, violent burst of grindcore takes a crusty, no-nonsense approach to extreme neurotic grind. An absolutely ear-splitting aural bludgeoning (influenced heavily by old Napalm Death) mimicking the insanity of their live shows. 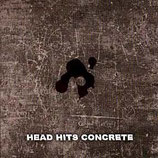 Pulverizing grindcore from Winnipeg, Manitoba. This Cd contains the Split with Bodies Lay Broken, Hope Fear & The Terror of Dreams Ep, the Split 10" with My Minds Mine, the s/t Ep, and a bunch of demo, live and cover tracks. 47 songs in total for 1 low price. Get it now!!! 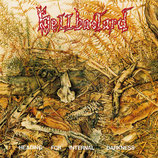 HELLBASTARD’s milestone debut album “Heading For Internal Darkness” (1988) is finally available again 32 years after its original release date. The material was released on vinyl back in 1988 followed by CD version two years later. The 9-song release brings forth classic metallic crust/thrash/punk from Great Britain that is an absolute must have for fans of AMEBIX, ANTISECT, DISCHARGE, SACRILEGE, SLAYER and the likes. The CD is released in standard jewel case with slipcase and extensive 24-page booklet including the band’s biography and history written by Scruff himself, liner notes by Woz, lyrics, and tons of gig and tour posters as well as never seen before picture from the band’s archives! On top of that there is 6 bonus songs not included on the original version! 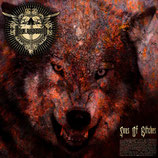 FIRST 500 COPIES COME WITH A SLIPCASE

Legendary UK thrash/crust/metal warriors HELLBASTARD are set to unearth five new tracks of sonic antagonism in the form of the fittingly titled "Sons Of Bitches" EP. Set for release on CD via Selfmadegod Records, "Sons Of Bitches" includes a re-recorded version of 1988’s “We Had Evidence” from the band’s 1988 "Heading For Internal Darkness" full-length. "Sons Of Bitches" is dedicated to all those who are currently outraged by the sheer patheticness humanity throws around on a daily basis. A “Mad Max” future scenario is imminent –many heads will roll. Join HELLBASTARD in their deathdance on all organized forms of oppression and slavery.

HERIDA PROFUNDA are a band from Poland and they play Old School Grindcore, Crust, brutal as fuck and super heavy stuff in the vein of TERRORIZER, REPULSION, old AGATHOCLES, NAPALM DEATH, ... .

HELLBASTARD from the UK, they so-called godfathers of Crust, deliver material that already appeared on their "The Need To Kill ..." LP but here you get different versions or mixes as well as unreleased material. Modern HELLBASTARD got adult now, they play variable but still crushing Thrash Metal without forgetting their "ancient" Crust roots. 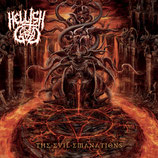 Hellish God's "The Evil Emanations" showcases 10 tracks of blasting Death Metal! Featuring current and former members of Antropofagus, Imposer and Mindful Of Pripyat the band moved its first steps in 2015 with the intent to play savage and satanic Death Metal influenced by the classic late '90s sound.
"The Evil Emanations" is the band first full album and is conceptually focused on Qlipoth, metaphorical shells which represent evil spiritual forces in the Jewish mysticism.

"HEXIS is a band from Copenhagen, Denmark, playing a mix of Hardcore and doomy black metal for fans of Celeste. The band has existed since 2010, but has already played 200 shows in Cuba, Russia, the UK and all-over Europe.

HEXIS makes black metal that pays no allegiance to deities or archetypes, black metal that is immersed in the foul grit of the human condition. All you are left with is your own pointless thoughts being battered blind by this overwhelming force of sound. Every note on “XI” is blown out and damaged beyond repair, sonics pushed into abusive levels. Strings breaking. Vocals emanating from your buried, atavistic lizard brain. Contempt and pity at the same time. From Copenhagen, did you even have to ask?"
- M. Moyer 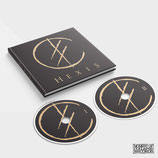 It is quite unbelievable what HEXIS (Denmark/Italy) have achieved in their career so far. Singer and bandleader Filip Andersen founded the band in Denmark in 2010. Within the last 10 years HEXIS then toured numerous times across the globe and stopped by at places like the United States, Canada, Japan, Cuba, Iceland, Russia, China, Australia, nearly every part of Europe and countless other countries. There are barely any places left, where they have not been on their  overall 800+ shows!!!

2020 should have continued like 2019 ended for the band, but this year everything is a bit different and so they couldnt play any shows (so far).

This year marks their 10 years anniversary and the band wants to celebrate it with discography double CD (40 songs), packed in a beautiful media book with 28 page booklet.

After two full albums and over ten EP / Split releases, covering almost all possible physical formats, it is time to look back now. The band is known for their distinctive blend of black metal that is influenced by doom-ish sounds and the furiousness of hardcore-punk without only adapting the stereotypes of the mentioned genres. The songs appear to be both, ferociously and in a way menacing when singer Filip unleashes his harsh vocals within the adamant and brute sound walls that  the other musicians build up.

HEXIS are extreme in any possible way! Highly recommendable for fans of bands like Celeste, Shora, Thou, Altar of Plagues, Ancst, Hierophant, All Pigs Must Die etc. !! 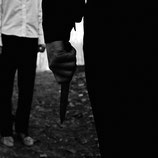 A musically and massive piece of chaos! for friends of bands like CELESTE... 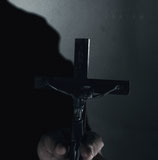 "The demon Abalam is a King of Hell and an assistant to Paimon. He takes possession of a human's body to encourage the human to commit lust, he would defile humans during the possession and the only way they could escape was death." 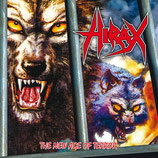 Thrash is back and so is one of the original cult-bands of this genre: HIRAX return to this new age of thrash to teach the new school a valuable lesson in classic ass-kicking with their 3rd album "The New Age of Terror". Taking the epic power of melodic old school pounding, HIRAX forge a perfect combination of great musicianship and clever song-writing into a forceful thrash-attack. Hailing from Orange County, California the band left a strong mark in the almighty Bay Area scene after its early founding in 1984. HIRAX quickly managed to gather an extremely dedicated following, which has gained them their undeniable cult-status even through some years of inactivity and several line-up changes. HIRAX are back and they are here to reclaim the throne... 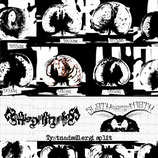 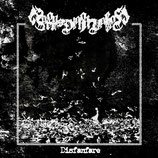 The first release of ESAGOYA Records. The 2020 EP will be the first physical release by Hornis Diphone Valley, which has been active only in music distribution since 2018 based in Hate Town Uguisudani. Extremely tuned down tremolo riff-dragging sludge part-hook ambient & sampling-Introduction of Moog synth, etc., a new generation ultra class that swallows various styles based on Grindcore after 90's and spits it on 2 beats & blast Tea Grinding Death Rush. 7 songs 20 minutes including cover of Insect Warfare. Paper sleeve specification / Sticker & cloth patch included. 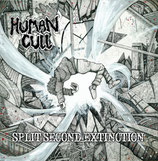 Album from 2012 of these English grinders. 11 short and in your face, no bullshit grindcore tunes.

Italian Brutal Grinding Hardcore, an bombastic mix with the Holy Terror Hardcore of INTEGRITY, RINGWORM... the Grindcore of BRUTAL TRUTH and an Thrash touch ala SEPTIC DEATH, mastered by Scott Hull at Visceral Sound. 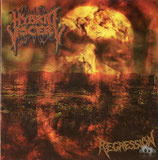